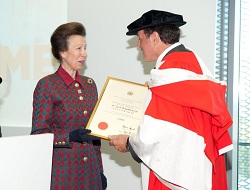 On Thursday, Oct. 6th during the City & Guilds Meeting of Council, outgoing WSI President, Tjerk Dusseldorp received a Fellowship from HRH Princess Royal Anne. The City & Guilds Fellowship is the ‘highest award conferred by the Council of the City & Guilds of London Institute, recognising outstanding professional and personal achievement. Fellows are people who have demonstrated excellence in their field, who have gained the respect of their peers and who can be considered role models for their profession.’

As the President of WorldSkills International from 1999 until the end of WorldSkills London 2011, Tjerk Dusseldorp was awarded a Fellowship for his commitment to developing and advancing international excellence in vocational skills training and education.

The entire WorldSkills family is thrilled with Tjerk’s recognition. Over the 30 years that Tjerk has been involved with WorldSkills (12 years as President), his accomplishments are too extensive to list, however, we would like to highlight a few: