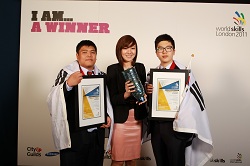 After four intense days of Competition, the medallists of WorldSkills London 2011 were announced tonight during the Closing Ceremony at The O2 Arena. Along with the gold, silver and bronze medallists in each competition area the Albert Vidal Award winner was also announced.

The Albert Vidal Award (named after the founder of WorldSkills International, Francisco Albert-Vidal of Spain) is awarded at each WorldSkills Competition to the Competitor who achieves the highest overall score of all Competitors in all competition areas. The level of skill required to win this notable award is very high and as a result, its winner is quite well regarded.

This year, the award went to Byeong Yeon Bae and Jeong Pyo Gong from Korea, Competitors in the field of Mobile Robotics.

As part of its mission, WorldSkills International promotes and encourages high standards of competence throughout the world in the industrial trades, information technologies and service sectors of the global economy. The Albert Vidal Award contributes to this mission by ensuring that excellence from Competitors is recognised and rewarded.

Congratulations to Byeong Yeon Bae and Jeong Pyo Gong who will continue the tradition of excellence that has been set out by Albert-Vidal and WorldSkills International.