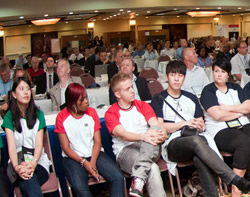 After four days of intense workshops and a few cultural excursions, the WorldSkills Youth Forum (WSYF) finally got to take the stage at the WorldSkills General Assembly (GA).

In front of WSI’s Member countries/regions, they presented six campaign videos including some very strong taglines, followed by suggestions on how to introduce them to the world.

The energy level was high as the presenters entered the stage, lead by our Host’s Sam Fairgrieve (Bricklayer, UK), Katie Watson (Restaurant Service, UK) and Omar Johnson (Web Design, JM). For about 40 minutes the WSYF took the audience on a journey through their own WorldSkills experience, having reflected on the influence WorldSkills can have on a variety of target audiences. Some of those people being celebrity spokespeople, employers, non skills believers and youth at risk of dropping out of the educational system.

Not a single sign of nerves could be found on the presenters and everything went as they had rehearsed in the morning. After the presentation the GA Delegates were invited to mingle with the WSYF and ask questions.

I would like to thank our Global Industry Partner Cisco for supplying us with a Flip (video camera) for each group. The WSYF participants voted on who had inspired them the most and the six highest votes were given a Flip afterwards.

I would also like to thank WorldSkills Jamaica for an outstanding social programme, we all had so much fun and the hospitality we have met here in Kingston have been overwhelming. Last but not least, to all the WSYF participants: wah a gwaan mon!

Currently studying to get her Master’s degree in Psychology at the University of Copenhagen and working for the Royal Danish Defence Academy at the Institute of Leadership and Organisation. Here she facilitates leadership courses and teambuilding exercises for the management teams. She is currently writing her thesis on the leadership of volunteers.

Currently employed by UK Skills as their Alumni Co-ordinator.

Owns his own company, Jaladesign, and works freelance for WSI.

Marlon is currently employed by the Heart Trust NTA as a Junior Programmer Analyst.