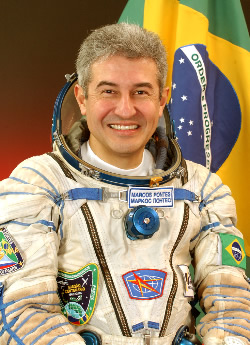 As a military pilot, he was qualified as an instructor and squadron leader for Ground Attack missions. As a Flight Safety Officer, his work experience included 22 years in aeronautical accident prevention and investigation. His experience on Flight Safety includes participation on the Space Shuttle Columbia Accident investigation. As a test pilot he worked on weapons development, missiles, including the first Brazilian air-to-air missile, and several aircraft tests and evaluation. He has logged over 2,000jet and test flight hours in more than 20 different aircraft, including F-15,F-16, F18 and MIG-29. As a Technical Consultant, he works on concept development, systems design, and project management for the aerospace, energy,and transport sectors.

Pontes is the first professional Brazilian astronaut to go into space. He launched with the Expedition-13 crew from the Baikonur Cosmodrome in Kazakhstan on March 29, 2006 aboard a Soyuz TMA spacecraft, docking with the station on March 31, 2006, where he lived and worked for the next 8-days. Pontes returned to Earth with the Expedition-12 crew landing in the steppes of Kazakhstan in their Soyuz spacecraft on April 8, 2006.

Currently, Astronaut Pontes works as a Professor at the Aeronautics Engineering Division of the University of São Paulo (USP-SC), Researcher at the Advanced Studies Institute (USP-SC), Institutional Relations for the Brazilian Space Agency(AEB), and also, at the private sector companies, as a Technical Consultant,and Life/Executive coach. He is the CEO for MP Engineering Company, the Coordinator of the Space Science Interdisciplinary Laboratories Association(ALICE) Project, and the Director of Space Technology at the National Institute for Space and Aeronautics Development (IDEA)

He continues on stand-by, as an astronaut for future Brazilian space flights. 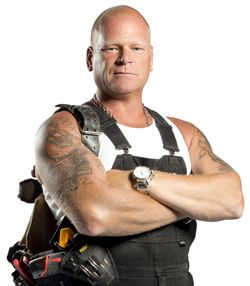 Mike Holmes is known as Canada's Most Trusted Contractor and is considered Forbes' Third Most Trustworthy Celebrity. When Mike was very young his father passed onto him a simple code, which continues to push him to do what he does best: Make It Right®.

Mike has accumulated over 30 years experience as a professional licensed contractor, completing nearly 200 home renovations and remodeling disaster projects and 52 home inspections throughout his television career. His award-winning series and specials are seen in over 83 countries worldwide and he is considered the Second Most Trusted Canadian by Reader's Digest.

Mike started his career in television over ten years ago as co-creator and host of one of the most popular television programs in HGTV history, Holmes on Homes®, which was the #1 show on HGTV Canada since the summer of 2004.

Since then he has been able to use television as a tool to educate homeowners on proper building code, what to look for in contractors and their rights as homeowners.

Mike has spawned a number of thriving projects related to his area of expertise, including television and media production, product and service development, as well as publishing. Mike has also successfully launched Holmes Approved Products program, which incorporates partnerships with industry leaders, such as 3M and Eaton.

As a craftsman with integrity, Mike not only understands the practices of the building trade but is also dedicated to adapting them to the changing needs of homeowners and the environment. His tireless dedication to improving building standards and sustainable construction has been recognized by both the Canadian government and building industry. He has been officially acknowledged by the Canadian House of Commons for his promotion of skilled trades and advocacy for improved building standards.

Mike Holmes has consistently proved his expertise, technique and skill when it comes to building, but it's his passion and integrity to Make It Right® that has struck a chord with homeowners and industry leaders alike. It's this kind of passion which people seek for various industry events, prompting him to become the national spokesperson for Skills Canada, WorldSkills Ambassador, honorary guest speaker for the 2009 GreenBuild conference and 'Eminent Advisor to the Canadian Government' for the COP15 in Copenhagen (United Nations' conference on climate change).

Mike's mission is to improve the building industry from the ground up and raise building standards across the board. He believes that educating the public at large on the importance of upholding building code and construction principles is essential to preserving and enhancing the safety and well-being of communities and households, both at home and abroad.

Mike believes that educating the public at large on the importance of upholding building code and construction principles is essential to preserving and enhancing the safety and well-being of communities and households, both at home and abroad. For this reason he continues to work in television today through his new series, Holmes Makes It Right. 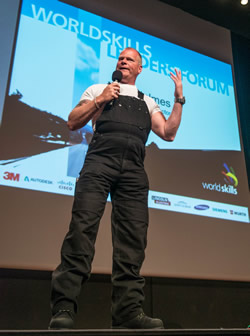 Holmes on Homes® (2002–2008)
A series about contractor rip-offs and how to avoid them. Homeowners around the world learn from Mike's tips on how to manage a renovation and what to look out for when it comes to home repair and maintenance.

Lien on Me, Holmes on Homes (2008)
A two-part special where Mike helps a desperate couple after a contractor put a lien on their home. Mike tears down their house, brick by brick to build them an entirely new home using sustainable building techniques.

Holmes in New Orleans (2009)
A gripping re-telling of a project where Mike and his crew travel to New Orleans to build a sustainable, hurricane-resistant house for a victim of Hurricane Katrina.

Holmes Inspection (2009–2011)
A series that highlights the problems homeowners face when a home inspection doesn't do what it's supposed to – protect the homeowners.

Holmes Makes It Right (2012–present)
A series where Mike helps homeowners and communities in hopeless situations by giving everything he's got to make it right.