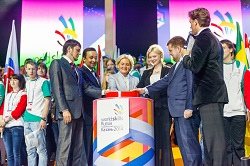 With the support of the Ministry of Education and Science of the Russian Federation and Agency for Strategic Initiatives, the Russian National Skills Competition was held 14-20 May 2014 at the Kazan Exhibition.

The Opening Ceremony was held on 16 May with a welcome speech from Olga Golodets, Deputy Prime Minister of the Russian Federation; Engel Fattakhov, Minister of Education and Science of the Republic of Tatarstan; and Pavel Chernykh, Technical Delegate from Russia in WorldSkills International.

Three days of competition were comprised of 39 Russian Regions, 39 Skills, 455 Competitors, 511 Experts from Russia and from 10 other countries, and more than 53,000 visitors. The participants competed in 35 different skills plus four demonstration skills were presented: Oil Drilling, Pre-School Teacher, Entrepreneur and Baker. The Competition Information System (CIS) was used for the first time at the Russian National Skills Competitions learning environment.

It was truly an international event with a number of international Experts taking part including those from Australia, Ukraine, Belgium, Finland, Canada, Switzerland, Germany, Armenia, Austria, and South Ossetia.

Two years ago, Russia joined the WorldSkills movement and since then, the movement has made a significant impact on the development of world class standards in Russia. Now, Russia has a serious commitment to WorldSkills, and intends to bid to host the WorldSkills Competition in 2019.

On 20 May, the medallists were awarded by the President of WorldSkills International, Simon Bartley. The first place team was the Republic of Tatarstan, followed by the second place team of Moscow, and the third place team of the Sverdlovsk region.

The partners of the Competition were represented by over 50 companies and organizations, including FESTO, CISCO, DMG, FESTOOL, Knauf, BASF, SVEZA, Association of Wooden House Building, IEK, Ford, and Kamaz.

The Russian National Skills Competition was covered by 450 international, national and regional media and 5 TV Channels.

The nationals are finished, but this is only the beginning for the Russian national team with training and preparation ahead of them to participate in WorldSkills Europe Competition (Euroskills Lille 2014) and the 43rd WorldSkills Competition (WorldSkills São Paulo 2015).