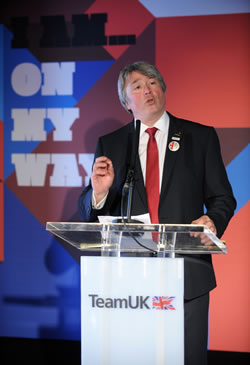 So, who is our new President?

Born in London on 25th June 1957, Simon spent his first seven years in London before moving 25 miles out of the City and into the countryside.

His mother, Joan, is a Doctor and his father, David, is an Engineer who ran the family Electrical Installation business started in 1921 by his Grandfather. From the age of 8 until 18, Simon attended a boarding school in the Northwest of England.

At 19, Simon went to Durham University for three years to read a BSc in Engineering Science Management, which he describes as ‘the most fun time of my life’. Graduating in 1979, Simon went to work as a Civil Engineer at John Mowlem plc where he worked on a variety of construction projects in London and across the UK including Heathrow Airport Terminal 4, Drax Power Station and the new British Library at St Pancras over a period of five years.

It was during this time that Simon firmed up his views on the importance of Management and so he returned to Durham, this time to the Durham Business School, to undertake a Masters Degree in Management Studies (what would today be called an MBA).

Following another highly enjoyable year in Durham, Simon joined his father in the family business where he started as the Assistant Company Secretary moving on over some 12 years to become both Managing Director and eventually Chairman. With a £6 million turnover, the business specialised in high quality electrical installations in buildings as diverse as London’s Globe Theatre, schools and colleges, churches and cathedrals. In 2000 he sold the business and established his own consultancy where he specialised in project management and personal development. Says Simon “I realised that I enjoyed training and developing people more than the commercial side of Engineering and I increasingly became more involved with industry and national training initiatives.”

Having joined the City & Guilds National Advisory Committee for Construction and Building Services as its Chairman, in 2006 he was asked to be part of a four person working group to study and make recommendations as to whether City & Guilds should sponsor WorldSkills London 2011 was the UK’s bid to host the event successful. “This produced two outcomes” says Simon, “Firstly City & Guilds agreed to be a £1 million premier sponsor of WorldSkills London 2011, and secondly I was invited to join UK Skills and the bid team when they went to the General Assembly in Melbourne in May 2006 to represent UK employers, an invitation I was delighted and proud to accept.”

Some 16 months after London won the bid, Simon was approached to consider applying for the Chief Executive role at UK Skills which had become vacant. Successful in his application, Simon took up the CEO role just before the 39th WorldSkills Competition and joined Team UK in Shizuoka, Japan, in November 2007. In Shizuoka he also joined the Board of WorldSkills International as an ex-officio Director because of the UK’s hosting of WorldSkills in London in 2011.

In July 2010, following the election of the coalition Government in the UK, it was agreed that the work of UK Skills should be split and in future be undertaken by the National Apprenticeship Service and the Skills Funding Agency, both Government Agencies. Simon continued to lead the organisation until the transfer took place in January 2011 whereupon he returned to his consultancy work.

In October 2010, at the WorldSkills International General Assembly in Jamaica, Simon was elected as WorldSkills President. He took up his four year Presidency on 10th October 2011, the day after the Closing Ceremony at WorldSkills London 2011 of which he had also be Chief Executive.

Some interesting facts about Simon . . .