Past Champions lead the way 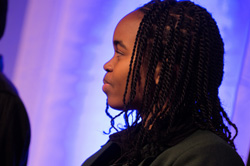 “The experience was overwhelming, it made me believe anything is possible”, Past Champion Anesha Simpson said.

After being welcomed by the Premier of Alberta, the Honourable Ed Stelmach, Tapscott’s lecture presentation encouraged the audience to think differently about the generation that is leading our workforce today- the Net Generation. He stressed that now is a time of big change in the global workforce. As a result, the WorldSkills Movement is critical to the world economy.

With almost 650 in attendance, Tapscott explained that in Canada alone there are 8 million people in the Net Generation and, “vocational work has become knowledge work”. There is a major focus on life-long learning now, and technology plays a big part in this: not only as a tool for research, diagnosis, education, and communication, but also as an innovative form of infrastructure.

For more information and to view the presentations please visit www.worldskillsleadersforum.com.

Five Past WorldSkills Champions then joined Tapscott for a panel discussion. These former Competitors were: 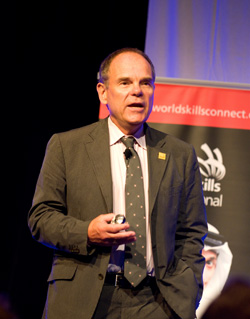 When asked how the WorldSkills competition changed their lives, IT specialist, Anesha Simpson-Nembhard answered for all: “The experience was overwhelming. It made me believe anything is possible. I became an international star just by doing my skill.”

Since winning the Best of the Nation Award in IT Software Applications, Anesha has returned to her studies, and is in the final semester of her Bachelor of Science degree. She went on to talk of the need for a tailored education system that tends to the individual needs of students: “Some people work with their hands, some people love to dance, some people love math. There are many different types of students, and the stigma attached to skills needs to be broken.”

The impressive achievements of the Champions do not stop there. 2003 Graphic Design medallist Anthony Chong explained how he is now working as a performing artist, travelling the world on commission to spray graffiti. Simon Buchman owns his own Landscape Gardening company, employing three people full time. Adam Peirson is a successful chef who continues to be encouraged by his family to strive for the best in life. He described the great satisfaction and happiness he enjoys in what he does. Last but not least, Canadian Auto Technology Champion Nathan Banke went on to explain how a lifelong passion for cars has forged his WorldSkills journey. He took a course in high school and enrolled as a student to Algonquin College at the young age of 16. He has worked as a mechanic for several years now and, after collecting a Medallion of Excellence in Shizuoka, was handed the role as an Expert at the Canadian Skills Competition this year.

These inspiring testimonies give some idea of how relevant the WorldSkills event and its participants are to what’s happening today, and so very necessary to the needs of Net Generation. As Don Tapscott explained, “we must encourage everyone to re-think learning and collaborate. Don’t just train: engage.”