New initiatives will change the future of the WorldSkills movement 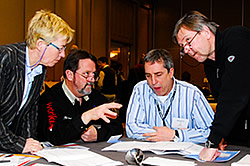 The Technical Committee meeting and following Chief Expert meeting which brought together the full Skill Management teams, by bringing in all of the Workshop Supervisors was a great success. We would like to thank WorldSkills Calgary 2009 Ltd for hosting all of the meetings in support of the WorldSkills Champions on the World Stage vision.

Raising awareness of what has many times been called ‘the world’s best kept secret’ is just one of the desired outcomes for the 40th WorldSkills Competition (WSC2009). WorldSkills International in partnership with its Members, WorldSkills Calgary 2009 Ltd. and stakeholders are hopeful their focus on sustainability and media engagement can contribute to this outcome.

Underlying the sustainability goals of WorldSkills International a task force lead by Tommy Hellström from Sweden has been developing proposals for inclusion in a Sustainability Policy to be implemented at WSC2009. The task force recognises that sustainability is critical to enable the future growth of the organisation and promotes and recognises the basic principle of the 3 Rs; Reduce, Recycle and Reuse. These are all global issues which when brought under the WorldSkills banner allow Members to work together to provide an outcome not only for the Competition but as an example for industries globally. 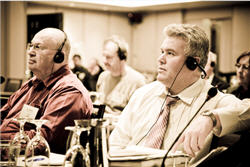 Current tough economic times coupled with the growth of membership lays the perfect platform for WorldSkills International to be seen as a driving force in initiatives for cost reduction. A perfect example is the Cooking skill which is traditionally cost reliant, has managed to reduce infrastructure requirements by imaginative thinking and better use of resources and time.

Currently having 32 Competitors registered to compete, the proposal to reduce the number of kitchens available to 17 was widely accepted by the Technical Committee and Chief Expert, Ctefan Wohlfeil from Germany. By agreeing to this reduction and consequent cost, WorldSkills Calgary 2009 has made the commitment to better equip the kitchens resulting in Competitors being able to bring smaller toolboxes. The flow-on effect reduces cartage costs for members but also helps to reduce greenhouse emissions created by transporting large toolboxes. The Cooking Skill Management Team is currently working on devising a shift arrangement for Competitors during the Competition. 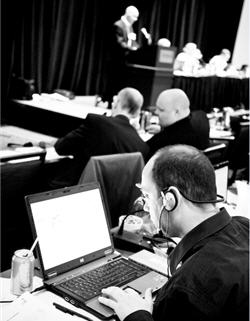 Recycling and reusing household materials has been buzzing around us for years. The Sustainability Policy will also bring these into focus. Experts have been asked to consider making changes to their Technical Descriptions to include the requirement of Test Projects to have a purpose after the Competition. In skills such as Carpentry, Sheet Metal Technology and Web Design the Test Projects created over the four days will be donated to organisations as a legacy of the Competition.

In conjunction with these initiatives the Sustainability Task Force has proposed the implementation of a Sustainability Award which will be open to all skills. Stringent criteria covering the impact on the environment and community, consideration for future growth of the skill and best practice has been developed to be consistent with the proposed Policy.

Engaging the media in the excitement of the Competition is an ongoing challenge and this year an Expert in each skill will be responsible for liaising with the media at the Competition about their skill, the Competitors and the projects been undertaken. For the first time media will receive daily reporting for the majority of skills. The daily reporting will announce the top Competitors in the skills in random order, to still leave the element of surprise in the Closing Ceremony.

We are very excited about the new initiatives and look forward to a successful Competition. For more information about the 40th WorldSkills Competition in Calgary, Canada visit: www.worldskills2009.com