I am still in awe at the incredible WorldSkills event that took place in Leipzig, Germany. It was truly amazing to see thousands of the most talented youth from around the world compete for the top title in their skill.

WorldSkills brings top international trainees age 23 and younger to compete for medals in 46 official disciplines — from Cooking to IT Network Systems Administration.

The Closing Ceremony brought tears of joy and shouts of excitement as the names of each competition winner were unveiled, bringing to an end the intense week in Germany. Seeing the sheer joy on the winner’s faces was emotional and an experience I will never forget.

As a Global Industry Partner in WorldSkills, Cisco sponsored IT Network Systems Administration. Asia led the top positions, with Jason Soh from Singapore and Takuya Nishide from Japan taking home gold medals, and Hui-zhong Liu from Chinese Taipei with a bronze. A huge congratulation to the winners and all Competitors who took place in the event!

So what happened over our week in Leipzig?

The four day IT Network Systems Administration competition covered various IT skills including Linux, Windows, Unified Communications, and Network Security: a realistic mix that employers would look for in a systems network administration expert.

US Expert Kelly Caudle from Stanly Community College in North Carolina gave a great overview of the competition in this short video. 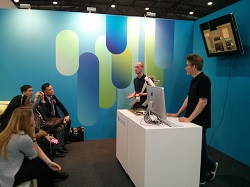 Cisco also had a booth where visitors could learn more about IT careers. At this Discover Your Skill booth, student volunteers from Vocational Training School Academy in Muelheim delivered live demonstrations for visitors on IT use in sports, renewable energy, and networks. We also had volunteers in the skill area who helped with the set up and take down, and ensured that the competition was ready to go each day. A huge thank you to all our volunteers for making the event a success!

Why is Cisco involved in skills competitions?

Competitions like WorldSkills and Cisco NetRiders give Cisco Networking Academy students a chance to not only test out their skills, but also gain recognition. NetAcad students do particularly well in WorldSkills; over 90 percent of the 2013 IT Network Systems Administration Competitors came from the Networking Academy programme, including two of the three medal winners. NetAcad courses prepare Competitors by giving training in a hands-on environment that allows them access to online assessments, hands-on activities, and interactive learning tools.

For WorldSkills, Cisco experts designed unique Packet Tracer tasks that were used each day of the competition as a part of the assessment process. As a spectator, I thought this was the most exciting part of the day; computer screens were turned toward the public and we could see the process of creating a network in a realistic virtual setting. 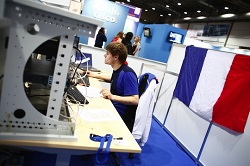 The skill Experts I spoke with also confirmed that these competitions:

What will the future bring?

A high percentage of the 200,000+ visitors who attended WorldSkills were youth from the surrounding area. These young people had the chance to watch hair stylists, auto mechanics, and chefs create spectacular projects. So how do we share that IT is also exciting? I remember one of the keynote speakers from the event saying that technology would affect each and every one of the skills demonstrated in WorldSkills in the future. This could not be more true! We need students to understand IT and become familiar with it regardless of their career path, as it will be essential in every field.

The IT industry is booming, and will continue to grow in the coming years. In recent skills gap studies, we have seen proof that there is an increasing need for IT professionals. To give a few statistics: between 2011 and 2015, an estimated 1.7 million jobs will be created in cloud computing in North America alone, opening a huge job market for students planning a career in the field. In Europe, figures show that there will be up to 900,000 information and communications technology (ICT) vacancies by 2015.

Cisco is involved in several initiatives to help bridge the skill gap, such as STEMconnector and the Grand Coalition for Digital Jobs organized by the European Commission. Gert De Laet from Learning@Cisco also participated in the signing of the European Alliance for Apprenticeships, which was launched during WorldSkills Leipzig 2013.

I look forward to the excitement as preparations begin for the next WorldSkills Competition in São Paulo, Brazil in 2015!

Learn more about Cisco Networking Academy and find a programme in your area.