International seminar in Finland on sustainability in VET 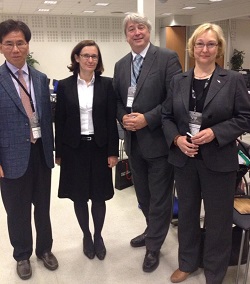 An international seminar around "work based learning as a sustainable practice on vocational education and training" was held 9 April 2014 in the Finnish national competition in Lahti.

There were 200 participants from almost 50 countries, including Russia, Egypt, France and Brazil. The conference was held in English and simultaneously translated into arabic.

Not only did Finland host the international seminar on sustainability but their National Skills Competition that was held at the same time also had a sustainability focus.

Everything that could be recycled was recycled, as little waste as possible was produced. As little printed material as possible. These wer the rules for the Finnish national skills competition Taitaja.

Taitaja is organised every year. This time the event took place in Lahti, about hundred kilometers north from the capital Helsinki. Lahti is a city with a strong environmental strategy, so it was only natural, that also skills competition Taitaja took a step towards a more sustainable future.

How to be green in a skills competition?

A special strategy for sustainable development was created and the subject was considered in every individual skill. The main idea was to lower the amount of waste, and make sure that it was recycled in an efficient way.

Some examples of “green thinking” in the Finnish skills competition:

Getting familiar with Green Skills

The study path “Green Skills” introduced nine different skills with a sustainable developments aspect. Study paths are a Finnish innovation where pupils and other audience could visit the competition with a dedicated guide that introduces them to different skill sectors, for example service skills, building skills, or to green skills.

Green Skills Study Path was invented by students. Maija Karjalainen was the student behind the idea of it. She is studying in Salpaus Vocational College to become Environmental operative, a person in companies and organizations that makes sure that recycling the waste is made in an efficient way and sustainable development is taken into consideration in all the actions. So environmental operative mainly works indoor in cities, not in parks or forest!

Environmental sector is often considered to be something a part from the “normal” work. We wanted to take it in to the different skills and show that sustainable development can be a part of every skill, Maija tells about the idea.

She was brainstorming about the idea with other Salpaus students and they made their suggestions for different skills. Pastry Cook, Cooking, Transportation, Plumbing, Autobody Repair, Bricklaying, Landscape Gardening, Print Media Technology and IT Network Systems Administration were the skills that were showcased this year demonstrating their actions towards a more sustainable future.

But any skills can be a green skill and hopefully next year we will see some new “green skills” in Taitaja.

Over 450 students from all over Finland made their way to the finals that were held from 8-10 April. They were competing in 40 skills. The event was also very international, and there were even 34 foreign Competitors and about 300 foreign guests, among them the President of WorldSkills International, Mr Simon Bartley.