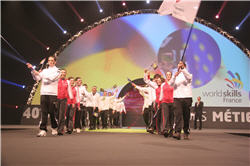 This was a competition to remember, as all previous records were broken: 756 competitors were on site, surrounded by close to 500 Experts. The number of visitors also exceeded all expectations, as 106,000 visitors came to discover the 49 skills on display.

Local and national VIPs visited the competition, and most of them were very pleased to have the opportunity to meet with Mr. Tjerk Dusseldorp and Mr. Laurent Thibault, respectively President and Treasurer of WorldSkills International, who were also visiting the competition.

President Dusseldorp said: "I am delighted that France has sent in an Expression of Interest to host the WorldSkills Competitions in 2013 in the Paris-Ile de France region. Based on the high quality of this national competition, I know that France would do an outstanding job in 2013." The Board of Directors will be reviewing all Expressions of Interest at its next Board meeting in March. 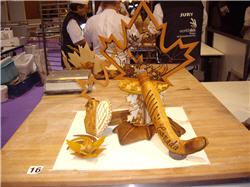 Many of the Test Projects had a Canada theme to them

The closing ceremony, held on the last day of the competition in front of 5,000 spectators, saw the birth of the French team that will go and represent France in Canada. The names and faces are now known, and all eyes are turned to Calgary. The countdown has started, and the French skills team members are looking forward to meeting their fellow competitors from the rest of the world in September!

A bientôt à Calgary! See you soon in Calgary!