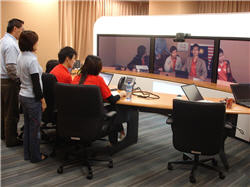 Team Malaysia and Team Thailand during the Competition

APAC NetRiders draws contestants from 15 Countries
Demonstrating the powerful collaborative capabilities of the network, Cisco organised its first-ever regional networking skills competition, APAC NetRiders 2008, over Cisco TelePresence™ and Cisco WebEx™. The competition featured 45 participants representing 15 countries in the Asia Pacific region, challenging each other for the top prize of an all-expenses-paid trip to the United States as well as bragging rights for the next 12 months.

APAC NetRiders is an annual competition held by the Cisco® Networking Academy® program, a comprehensive e-learning program that enables students to develop valuable information and communications technology (ICT) skills for increased access to opportunities in the global economy. Since 1997, Networking Academy has grown to reach a diverse population of approximately 800,000 students each year in more than 160 countries. The competition tests the capability and skill level of Networking Academy students in the area of computer network hardware design, configuration, development, and maintenance, all of which are covered in the Networking Academy curriculum.

Competing for the first time was Cambodia, where the inaugural Cambodia NetRiders 2008 competition was recently concluded. The competition featured 140 students from the Institut de Technologie du Cambodge, the National Institute of Development Authority, YEJJ Training, Enfant du Mekong, and Pannasastra University of Cambodia.

“We are really pleased to finally complete the first skills competition in Cambodia because it demonstrates that the Networking Academy has taken root in the country. It’s fantastic to have a team from Cambodia competing in the APAC NetRiders. Cisco Networking Academy has made a positive impact on people’s lives by encouraging career advancement, improving access to the Internet, supporting the growth of the ICT industry, and promoting sustainable economic development in the communities in which it operates. APAC NetRiders celebrates the talent that the Networking Academy community is fostering in the region,” said Sandy Walsh, head of Education and Corporate and Social Responsibility for Cisco in Asia Pacific.

The competition involves two levels of testing. The first level is a multiple-choice online examination, and the second is an online network configuration through a computer simulation test using Packet Tracer 5.0.

The unique feature about this year’s competition was that it was conducted virtually for the first time over Cisco TelePresence and Cisco WebEx. Cisco TelePresence is a ground-breaking technology that utilises the latest in video and audio techniques to establish real-time, live, in-person communications. WebEx® provides on-demand collaboration applications that enable individuals, small businesses and enterprise organisations to use the Web as an efficient channel for interaction with their customers, partners and co-workers. 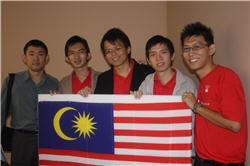 The standard of competition was very high and all teams put in a tremendous effort both preparing for the competition, as well as on the day. Cisco would like to congratulate all the teams on an outstanding inaugural APAC NetRiders Challenge.