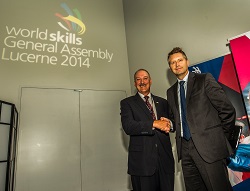 The world will gather in Niagara Falls in 2016.

During the WorldSkills General Assembly in Lucerne, Switzerland, Skills/Compétences Canada in conjunction with SkillsUSA were granted the hosting rights of the 2016 event.

Tim Lawrence, CEO of SkillsUSA co-presented the bid to host the meeting and had this to say about the plans for 2016, “SkillsUSA is extremely excited to be working in cooperation with Skills/Compétences Canada to bring the world to the 2016 meeting of WorldSkills General Assembly. Niagara Falls will offer Delegates a world class meeting venue, as well as an opportunity to tap into top industry, education and government leaders and experts from across North America.”

The last time that the Delegates of WorldSkills came to North America it was for the 40th WorldSkills Competition in Calgary, Canada in 2009.

“We commend the Swiss organizers for the great work on the 2014 General Assembly and we are thrilled to be co-hosting the event in 2016 with SkillsUSA. The Assembly itself will provide the opportunity for dialogue and the sharing of best practices between national and international partners,” says Shaun Thorson, CEO of Skills/Compétences Canada.

SwissSkills did a tremendous job in organizing this event and all Delegates had fruitful discussions. The 2014 General Assembly was held during the Swiss National Skills Competition enabling the international Delegates a chance to visit the competition.

“It was a pleasure hosting people from all over the World in Lucerne, Switzerland,” says Hans Ulrich Stöckling, President of the SwissSkills Board. “I congratulate Canada and USA on becoming the next host for the WorldSkills General Assembly in 2016.”